Since I started using Twitter on a regular basis, I felt overwhelmed by the endless stream of data generated by the people I was following.

The official Twitter page quickly became inadequate to manage my tweets, so I began to search for an alternative through the myriad of Twitter clients available out there, both web and desktop based. After trying out a few desktop clients, I decided to restrict the search to web clients only: between work and home, I may use up to 4 different computers and 3 different operating system, and I really didn’t fancy the idea of keeping the same client up-to-date everywhere — even if such client existed.

Over the past months I tried dozens of different web-based Twitter clients, and narrowed the list of must-have features to the following:

The good news is that I found at least one web-based client able to do all this: JournoTwit.

JournoTwit was born – as many software projects – to scratch an itch:

Probably the last thing anyone was expecting me to do — even myself, was to create my own twitter client. However, I’ve been a little fed up with not having the features I wanted and running 5 or 6 accounts, I was getting annoyed at using several different applications just to have them logged in concurrently. […] In under 24 hours I put together a twitter client that functioned enough for me to call it my one and only. A few more days and I added in enough features that I felt it was good enough for public consumption. It is however, not perfect and I have plenty of improvements on my to do list for it.

After months of public consumption, JournoTwit became a feature-packed Twitter client able to compete with a lot of mainstream alternatives – albeit remaining always relatively unknown to the masses. You can call it a niche Twitter client, able to satisfy a few basic needs:

These three features alone were enough to make JournoTwit my one and only Twitter client. And no, it’s not only for journalists and writers. 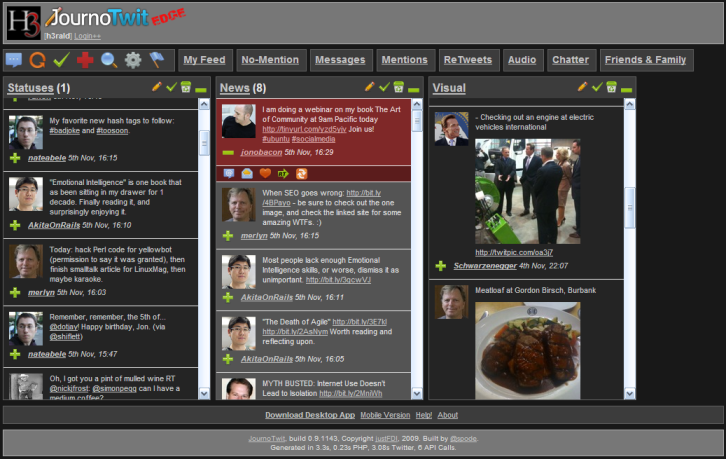 Note: I am using the edge version of JournoTwit, a sort of development snapshot with the latest features.

At the top, some more-or-less intuitive icons allow you to perform all the most common global actions:

Next to this global toolbar, there’s a list of links, each corresponding to a column. Clicking a link toggles the visibility of the corresponding column.

In each column, tweets are displayed in different column according to their state:

You can select one tweet at a time by clicking the + icon. This toggles the tweet-specific actions:

Pretty intuitive and easy to use, so far.

When you login, you’ll notice that all your tweets are not presented in the traditional, disorganized single-column stream layout. Instead, they are sorted automatically into different columns, according to their type:

Surprisingly, these default columns are enough to make your Twitter experience easier and more manageable, without configure a single setting. They’re obviously not perfect: some images are not resolved automatically, for example, but it works well otherwise.

Still this may not be enough for your needs or maybe simply not the right thing. No problem: JournoTwit is extremely flexible when it comes to organizing and sorting out your tweets.

All columns except for Mentions and Messages can be modified as you see fit. These two columns cannot be modified simply because there’s nothing you need to modify it, if you think about it. But they can be deleted, of course (and re-created in a blink, if you delete them by mistake).

Let’s go through the slightly geeky process of creating a column.

Because the overwhelming majority of my readers is composed by geeks, I’ll just describe how to create a custom column, so that you can fully understand the power of this tool, in the right hands. 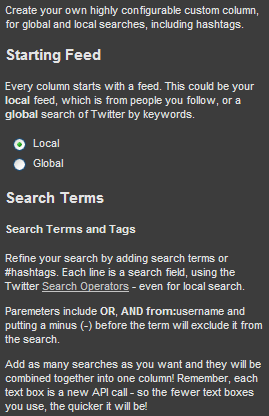 The creation of a custom column doesn’t take long, but there are quite a few things you can configure. First off, you have to specify whether you want the column to collect local or global tweets: local means the people you follow, while global means everyone on the planet. Simple enough.

…will hopefully fetch all tweets posted by @jonobacon or tweets about Ubuntu, but not related to the Jaunty Jackalope release. You can also add more text box and thus perform more search queries within the same column.

Then you can filter by tweet type, enabling or disabling Statuses, Visual, Links, Audio, ReTweets and Chatter. Useful to remove the noise (if you follow @brentspiner, make sure you disable ReTweets…).

Finally, you only have to configure a few more settings:

That’s all. Simple enough. As a side note, the “No-Mention” column is nothing but a custom column in disguise: if you try to edit it, you’ll see it’s nothing but a search for “username -@username -from:username”.

Other features and advanced settings

For the tweakers, JournoTwit also exposes the a set of global settings you can modify to enhance your experience or disable annoying behaviors (depends how you look at it):

If you are unsatisfied by JournoTwit’s default look and feel, you can change the fond size, the color theme (there are 18 possible choices) and even match the color of the icons with the current theme.

Straight from the contextual help:

“Here you globally black list a #hashtag, such as #microsoft, or a search phrase such as “Windows 7”. Remember to separate them with a space and that you can block on a per column basis too."

This is just what you need when you want to filter out pointless tweets. Use with care though!

Maybe it’s just me being a geek, but I think JournoTwit nailed it when it comes to making Twitter more productive: everything just works, and fast, unlike some of its more feature-boasting competitors. I have been using it on a daily basis for weeks, and I’ve never missed a single tweet since (unless I explicitly wanted to do so).

That being said, there are a few small features I’d like to see:

I already told @spode about some of these, and he said he’ll look into it, we’ll see what happens. Anyhow, just give it a try, and see if you like it!