I don’t remember the exact day when I started using a todo list in a serious way. It definitely happened at work, but I can’t remember when exactly. The point is that, once I started working (and getting paid for what I love doing – writing), I slowly turned into a real productivity freak.

I write everything down. My colleagues know that if I say that I’ll do something right now but I don’t do it within five minutes, they have to assume that I forgot about it altogether and they’d better send me an email.

I am not a paper person. Never been one. When I got a job which consisted in working on the computer for eight hours a day, I started looking for todo list programs. That turned into an endless quest: I tried X for a few weeks, then I discovered that Y was better, used it for months, then moved onto Z, and so on.

Over the past five years, I must have tried dozens of different digital todo lists, and every single one of them had something wrong with it. Here are the most common flaws I encountered in many applications:

Wunderlist, the List of Wonders, you can use it anywhere and at any time. It’s so awesome that… I should stop the ass-kissing right now, and get to the facts.

I discovered Wunderlist when my endless quest led me to the App Store. I think I must have installed nearly all the damn todo list apps, even the crappy ones. I didn’t fall in love with Wunderlist at first tap: it took a few install-uninstall cycles, but in the end I settled for it. Here’s why:

When I finally realized how awesome this app was, I started using it for chores, and as a shopping list. Then I figured it was good enough as a backlog for my open source projects and my web site, and then… Then my wife discovered it. 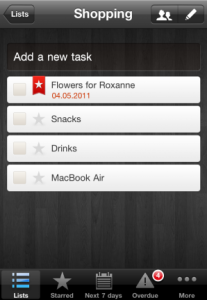 One of the relatively unusual features of Wunderlist is the possibiliy of sharing lists with others. All you have to do is click a button, specify one or more email address, and send invitations out. People will then signup for a free Wunderlist account and they’ll be able to access (as in read/write access) your list.

Because Roxanne, my wife, has an iPhone, she was the most obvious candidate to try out this collaborative feature. First I shared my Shopping list with her: we needed to make a list of things to get for a party, and that was fun. Wunderlist worked perfectly: we went around the supermarket and ticked things off the shared list, which updated in real-time!

All went great until I decided to share the infamous Chores list. You know the one: bills, fees, errands… I used to say things like “it’s on my list, honey, I’ll do it”, or even “Yes… I’ll add it to the Chores, just gimme a minute”. Little did I know that my beloved liked Wunderlist so much that she started using it frequenly, constantly updating the damn chores list with things like “Take the rubbish out” or “Collect the package from the post office”.

I realized she became a true Wunderlist ninja when I found a task called “Flowers for Roxanne!” – starred and with a deadline set to two months ago!

After months of trial, I decided to use Wunderlist at work as well. With caution, of course: I made sure not to write down any sensitive information in my tasks, because you never know. I started off with just one list, but it got crowded very quickly. I now use five lists for work only: 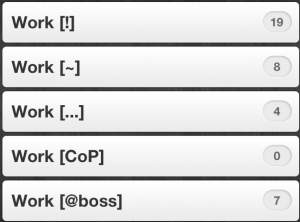 The next step? Maybe sharing lists with my boss and collegues, who knows…

Saying that Wunderlist is the perfect todo list for everyone would be pointless: there would always be people who wouldn’t agree with that. Wunderlist is not perfect, but close enough for me: it has most of the feature I need, and – most importantly – very little features I don’t need. In the end, this is what makes an app truly awesome.

I give it four stars out of five. Why not five? Because in this way 6Wunderkinder can make Wunderlist even a better product by surprising its users with something they didn’t know they wanted. That’s what Steve Jobs does at every Keynote, isn’t it? 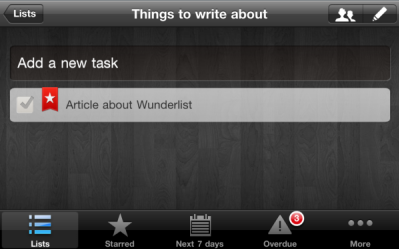