Just over a year ago I released the 8th version of this web site. The biggest change then was abandoning the Rails-powered Typo blogging platform in favor of nanoc, arguably the most versatile static site generator out there.

A year later, I am still very happy with nanoc, hence there’s no need for another major release. Nonetheless, I decided to improve the site’s overall design and image, making it (hopefully) easier to use and more pleasant to the eye.

I always had a problem finding the right theme for my web site. I always wanted to find something related to the word herald, so in the last release I went for a herandry-oriented theme. For this release, I decided to go for a newspaper-style layout: after all, the word herald is often used in newspaper titles, and I picked the name “h3rald” after the International Herald Tribune.

Also, I was desperate to try out the new features offered by HTML5 and CSS3, and a newspaper layout seemed a good excuse to use columns.

Although I shouldn’t really say this, the site is meant to be viewed with a WebKit-based browser, really. It works in other (modern) browsers (read: no IE6), and it degrades more or less gracefully if a particular feature is not supported.

Nobody ever died from not being able to see CSS3 rounded corners anyhow. The most important thing about this site is its content, and I made sure that whatever browser you’re using you can still read it.

As I previously stated, I couldn’t wait to try out CSS3 columns so I kinda went crazy on the home page, but just there. Some may argue that they are not suitable for web use of course, but I think they contribute to give the site layout a unique feeling.

The problem with having columns is of course text alignment: justified text looks good, but unless you hyphenate text properly it shows a lot of blank space. Luckily, I discovered hyphenator.js, which solved the problem nicely.

I made a point out of improving the old stylesheet to make the site easier to read and generally prettier. Beauty is in the eye of the beholder, but still, I think the new stylesheet brings some improvements, especially concerning text (the Gentium font is used throughout the site) and syntax highlighting.

Moreover, I worked on streamlining navigations across different sections of the site, in particular on article pages: 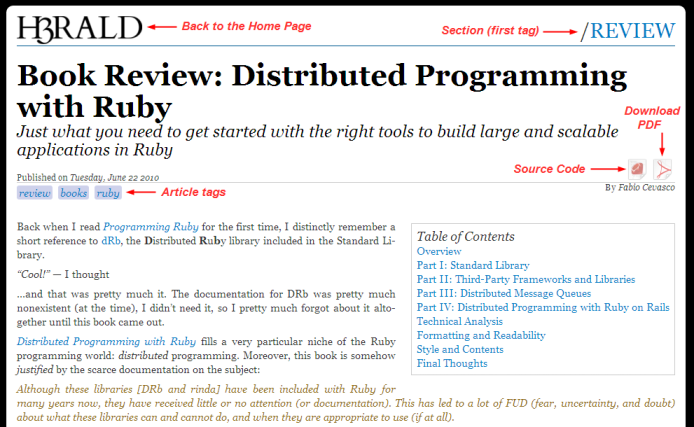 Besides appearence, the new site also features some improvements in its underlying business logic. In particular: