So Lithium is now officially out, and its 0.1 release can be freely downloaded from the official web site or by cloning the Lithium git repository. The good news is that although not many web hosts offer PHP 5.3, you can try it out youself, locally and with minimum effort.

According to the Lithium Wiki, to develop applications with Lithium you need:

To get the li3_docs plugin you need to register on rad-dev.org, and clone the li3_docs git repository. If you don’t have git installed or you don’t want to read another awesome tutorial to install it and learn how to use it, I’ll save you the hassle and let you download the plugin from here, for this time ony.

Note: This tutorial assumes that you are on Windows. If you are not, some things may be a bit different depending on your platform.

Setting up the environment

Choose a directory on your sistem (let’s call it D:\lithium_test from now on). We’ll do everything in here, and you can move it anywhere you like afterwards, even on a USB stick, without breaking anything.

If you did everything correctly, your D:\lithium_test directory should contain the following:

Double click mongoose.exe and point your browser of choice to http://localhost:8080/app/webroot/index.php. You should see the Lithium temporary homepage (yes, I expected something fancier too):

Now, let’s see if we can get the li3_docs plugin running as well:

Go to http://localhost:8080/app/webroot/index.php?url=docs, you should see something like this: 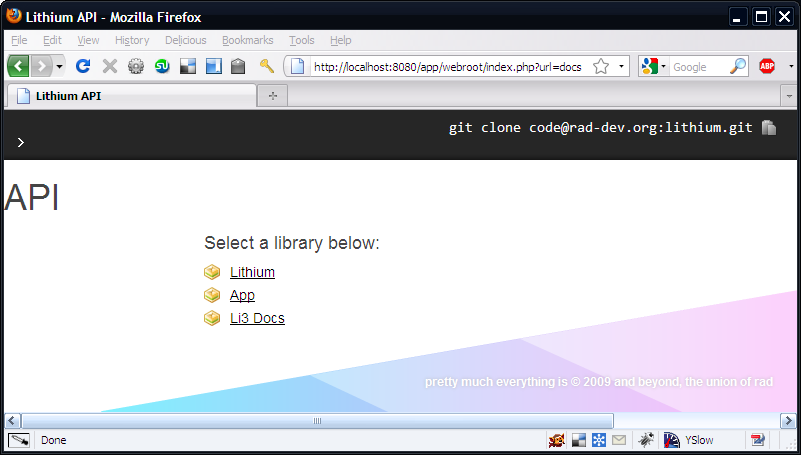 Once the initial excitement wears off you’ll notice that none of the links on the docs page works.

That’s because the mongoose web server does not support URL rewriting (and Lithium needs it badly right now), so we have to change the way URLs are created. @nateabele gave me some tips on how to do this; it’s very simple:

We’re basically extending the \lithium\action\Request with a custom class, telling Lithium how to create the base URL.

After doing so, open D:\lithium_test\app\webroot\index.php and change:

In this case, we’re instructing the dispatcher to use our custom Request class instead of the default one.

Now everything should work as expected. Reload the docs page (http://localhost:8080/app/webroot/index.php?url=docs) and verify that the links work by navigating to Lithium, then action and finally Controller.

Now you can use Lithium to display its own API locally (if things didn’t work out, there’s always http://li3.rad-dev.org/docs).